Guzarish - A MUST WATCH! 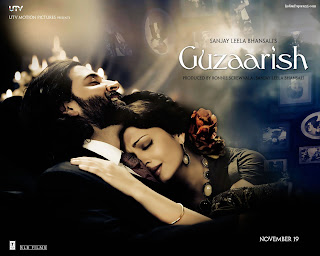 
Director Sanjay Lila Bhansali has come up with yet another heart-touching, tragic film in the form of Guzaarish which would squeeze the emotions of the audience. This is not a flick filled with glamour, skin-show, etc. Infact, it's not at all the usual bollywood flicks in which a boy meets a girl....they fall in love....a villain or two stand up against their so called "perfect love story"....they fight their way through the unfavourable circumstances and eventually get to live with each other and the film ends in a happy ending! Considering the past movies Sanjay has made, you wouldn't even expect that from him. This one here is a gem of a story!

Guzaarish is about a guy named "Ethan Mascarenhas" who's a magician and who's worked his way to be the greatest magician of the world. He is loved by zillions, envied by thousands. He dedicates his life to his career (magician). He performs at various events and wins the heart of his audience. He's also an RJ and conveys his thoughts and messages to his audience through the radio. He meets Estella Francis (Moni kanganadutta) and falls in love with her.

Everything's going smooth till one of his rival magicians, Yaseen Siddiqui ruins one of Ethan's magic trick and turns it into a capital punishment for Ethan, a price he had to pay for being better than Yaseen. Now, Ethan is completely bed ridden and spends 14 years in the bed. During these 14 years, Dr. Nayak(Suhel Seth) makes efforts in vain to bring Ethan back to normalcy. Dr. Nayak also appoints Sofia (Aishwarya Rai) as Ethan's nurse. While Ethan is fighting to the worst circumstances anybody could ever be made to live in, Sofia, gets married to an alcoholic guy. This guy doesn't like Sofia working for Ethan and forces her to quit the job. When Sofia refuses to quit her job, he starts beating her up and accusing her of betraying him. All this creates complications in Sofia's life and she finally decides to divorce her husband. She then starts giving Ethan all her time (she starts staying with him 24/7).

Ethan takes the suffering for 14 years, when he finally falls apart and decides to quit on his life. He appeals in the court to let him kill himself legally and the court rejects his appeal in the first place. He then appeals again. While his case is under consideration, the movie portrays what he faces during this time which is very heart-touching. I would not get into more details, I'd rather recommend all you guys to go and watch the movie to know what happens next. I've heard that the audience in India are reluctant to watch this movie, but trust me guys, if you go and watch this movie, you'd figure out why I've gone this far and written a blog on this.

Here's a link to the official trailer for this movie...Enjoy!
http://www.youtube.com/watch?v=k9QiS6nw1DM

Open to comments!
See ya guys around! :)